The story so far 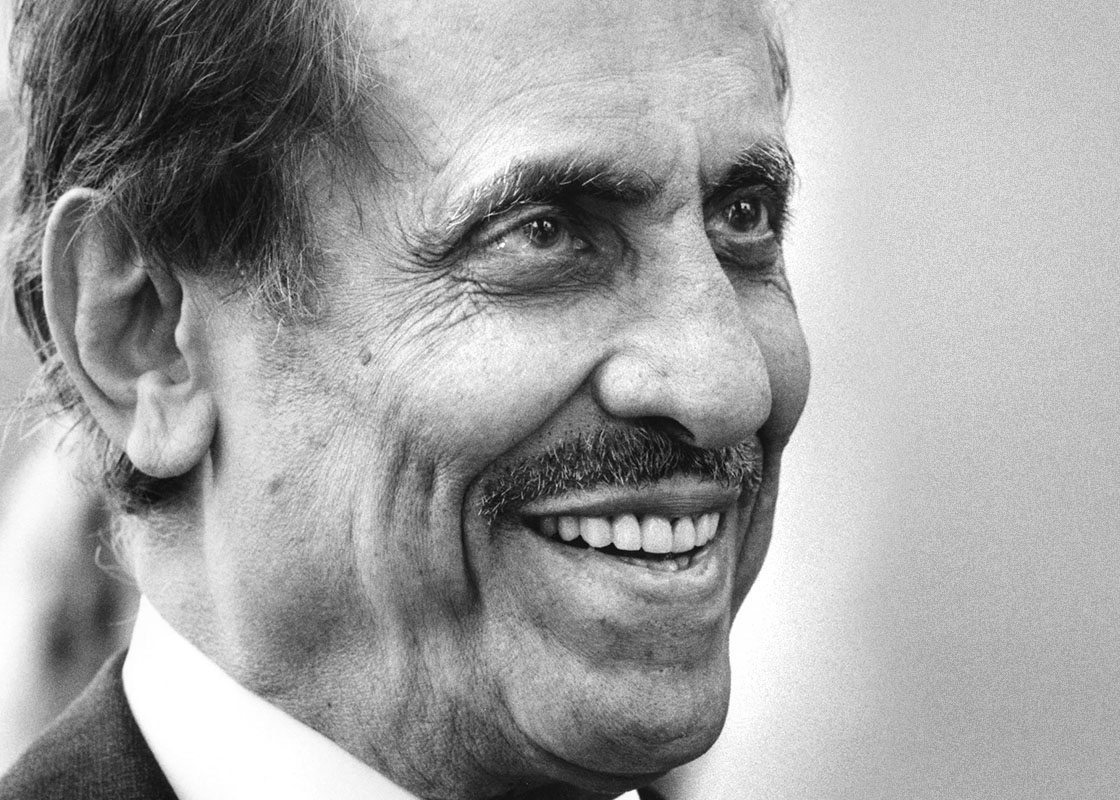 Prince Khalid’s interest in horseracing traced back to the 1950s. He first became an owner in the mid-1970s and, in 1979, won his first Group 1 with Known Fact in the Middle Park Stakes at Newmarket and purchased his first broodmare with the private acquisition of Metair. The name Juddmonte was first used in the context of Prince Khalid’s racing and breeding operation in 1980. Already a two-year-old Group 1 winner, Known Fact’s victory in the 1980 2000 Guineas established the colt as an exciting future stallion prospect and Prince Khalid acquired Cayton Park Stud and Pudders Farm in Wargrave-on-Thames, Berkshire, as Juddmonte Farms.

For 40 years, Juddmonte’s achievements resulted from his enthusiasm and direct involvement, which translated into an in-depth knowledge of his horses, their pedigrees and their families. The Prince’s time spent in the early days developing his understanding, finding the right horses, the right farms and the right people to look after them established the foundations for Juddmonte’s track record.

Prince Khalid died peacefully on Tuesday 12th January 2021 at the age of 85. He leaves a legacy that will stand the test of time.

Already a two-year-old Group 1 winner, Known Fact’s victory in the 1980 2000 Guineas established the colt as an exciting future stallion prospect and Prince Khalid acquired Cayton Park Stud and Pudders Farm in Wargrave-on-Thames, Berkshire, as Juddmonte Farms. Known Fact had been purchased for $225,000 at the Keeneland Yearling Sales in 1978 and was trained by Jeremy Tree at his historic Beckhampton yard. Known Fact became Prince Khalid’s first Group 1 winner, first Classic winner and first stallion at stud, and went on to sire the Prince’s first homebred Group 1 winner, Warning (continues down the page beneath the interactive timeline).

Juddmonte’s first homebred winner came courtesy of Fine Edge, who was out of Prince Khalid’s first broodmare Metair in April 1982. That same month, a three-year-old filly named Slightly Dangerous was purchased following her win in the Fred Darling Stakes. She raced twice, including as runner-up in the Oaks at Epsom, but it was as a foundation mare that she became best known. As a broodmare, she produced the Group 1 winners Commander In Chief, Warning and Yashmak, as well as Group 2 winner Dushyantor and Classic-placed Deploy.

1982 proved to be a key year in Juddmonte’s history. At the Fasig Tipton July Yearling Sale, the colt that would become Group 1 winner and successful sire Rainbow Quest was purchased, as was Razyana, who became the dam of Danehill. Later that year Prince Khalid also acquired Ferrans Stud in County Meath, Ireland, and Belair Stud in Lexington, Kentucky, as a package from German industrialist Dr Herbert Schnapka. A number of broodmares and a stallion portfolio, not to mention Fleet Girl, the fourth dam of Enable, were included in the deal which helped expand Juddmonte’s band of mares significantly, as did breeding stock purchased from the estate of Jock Whitney the following year. This package included Rockfest, who was to become the great-grandam of world champion Frankel.

In June 1984, Ballinderry won the Ribblesdale Stakes - Juddmonte’s first homebred winner at Royal Ascot. Prince Khalid always liked the Royal Meeting, at which he had enjoyed his first Group win with two-year-old Abeer in the 1979 Queen Mary Stakes.

During the second half of the 1980s, the pink, green and white silks were carried to victory by Rainbow Quest, then by Dancing Brave, in the Prix de l’Arc de Triomphe, in 1985 and 1986 respectively. This prestigious race, the richest in Europe, is one that the Prince won on six occasions, making him the most successful owner in the race’s history, with Marcel Boussac. Dancing Brave finished his racing career as the highest-rated horse in the world, a crown he held for almost 40 years - until he was overtaken by Frankel.

Banstead Manor Stud near Newmarket was purchased from the Morriss family in November 1987. The 300-acre property became Juddmonte’s European headquarters, and the stallion Rainbow Quest was transferred there from Wargrave to stand the 1988 season. Further property acquisitions, including Estcourt Estate near Tetbury in Gloucestershire in 1996 and Side Hill Stud in Newmarket in 2004, have expanded the Juddmonte property portfolio to four farms in the UK, two in Ireland and two in the USA. The original Juddmonte Farms in Wargrave was sold in 2017.

In the spring of 1990, Juddmonte enjoyed its first homebred Classic winner when Houseproud won the Poule d’Essai des Pouliches. This was followed by two Derby victories, with Quest For Fame winning at Epsom and Sanglamore victorious at Chantilly. In the 30 years from 1990, Juddmonte homebreds have won 26 European Classic races, as well as two Classics in the USA. Wince’s victory in the 1000 Guineas in 1999 completed Juddmonte’s achievement of breeding the winners of all five English Classic races within a 10-year period. All five French Classics were achieved with American Post’s victory in the 2004 Poule d’Essai des Poulains.

The beginning of the new millennium saw Prince Khalid attain the first of his six Breeders’ Cup successes with Banks Hill in 2001 in the Filly & Mare Turf, a race also won by her full-sister Intercontinental in 2005 and by Midday in 2009. Banks Hill and Intercontinental were two of five Group/Grade 1 winners produced by Hasili, also dam of leading sire Dansili and 2006 UK Broodmare of the Year. Juddmonte is known for its broodmare band, and Hasili had followed in the footsteps of UK-based Slightly Dangerous, the first truly blue-hen mare, and Toussaud in the USA. One of only four North American-based mares to produce four Grade 1 winners (Chester House, Honest Lady, Chiselling and Empire Maker), Toussaud was crowned 2002 US Broodmare of the Year.

Both Toussaud (through Chiselling) and Hasili (through Banks Hill) contributed to several notable accomplishments in 2002. The Prince secured the title of Leading Owner in France for the first time and also received the Cartier Award of Merit, the TBA Award as the Leading Breeder in Britain and the Eclipse Award for Leading Breeder in the USA. All these titles have now been won by Juddmonte on multiple occasions throughout its 40-year-history.

In 2003, the Bobby Frankel-trained Sightseek won four of what would become seven Grade 1s, including the Beladame Stakes at Belmont, which she also won the following year. It was a successful year for the US operation as Toussaud’s son Empire Maker landed three Grade 1 races including the Belmont Stakes, a leg of the famous Triple Crown, and Tate’s Creek won two including the Yellow Ribbon Stakes. Sightseek (Juddmonte’s most successful Gr.1 filly until Enable), Empire Maker and Tates Creek were three of many good horses trained for the Prince by Bobby Frankel, and the men enjoyed a long friendship. Not long after Frankel sadly died of cancer in 2009, Prince Khalid named his best yearling – a colt by Galileo out of Kind - in honour of the great US trainer.

It was fitting that the yearling Frankel should be sent to another great trainer and friend of Prince Khalid, Henry Cecil in Newmarket. Cecil first started training for the Prince in the early 1980s, and over the years had nurtured the likes of All At Sea, Armiger, Tenby, Commander In Chief, Distant View, Reams Of Verse, Yasmak, Wince, Beat Hollow and Passage Of Time. Sharing his yard at the same time as Frankel were the Falmouth Stakes winner Timepiece, the six-time Group 1 winner Midday and four-time top-flight winner Twice Over, who provided Prince Khalid with his first win in the Juddmonte International in 2011, a race he had sponsored since 1988. Owner and trainer picked up the same trophy the following year with Frankel.

Now a successful sire, with a percentage of Group winners to foals greater than his peers, Frankel marked a new era for Juddmonte. In an unbeaten racing career from 2010 to 2012, he won 10 Group 1 races and became officially the world’s highest-ever rated racehorse, as well as the first horse in 60 years to be crowned champion at two, three and four years of age. He is today joined on the stallion roster by four-time Group 1 winner Kingman, who retired to stud for 2015.

The stallion operation is another important aspect of Juddmonte, aiming to provide breeders with a carefully selected roster of stallions that are supported by Juddmonte's broodmare band. Juddmonte stallions have also achieved many accolades over the years, beginning with Champion First Season Sire Warning in 1992 and, on the current European roster, three of the four stallions with runners have received the TBA Tattersalls Silver Salver as the Leading British-based First Season Sire. All Juddmonte’s current European stallions are homebreds going back at least two generations.

In 2018, Arrogate joined the roster in Kentucky. His acquisition by Prince Khalid had marked a departure from Juddmonte’s usual strategy of breeding to race, but it was almost a return to its initial roots, as he was purchased as a yearling at the Keeneland September Sale in 2014. The unmistakable grey was twice crowned Longines World’s Best Racehorse in 2016 and 2017, after a run of four Grade 1 victories, including a record-breaking Travers Stakes and the Dubai World Cup, that saw Arrogate become the highest earner in US history. Sadly, Arrogate died in 2020, but not before siring three high quality crops to represent him on racecourses in the years to come.

As Juddmonte celebrated a landmark 40 years as a racing and breeding operation in 2020, Enable was the star flagbearer. A fourth generation homebred who remained in training for five seasons, with 11 Group /Grade 1 races to her name picked up across four different countries, she epitomised everything that Prince Khalid had striven to achieve. In 2020, Enable became the first horse ever to win three renewals of the King George VI & Queen Elizabeth Stakes at Ascot, before attempting the same feat in the Prix de l’Arc de Triomphe, a race she had won in 2017 and 2018 before finishing runner-up in 2019. In very testing conditions, Enable finished sixth, but secured her place as the most successful horse in the race’s history. She retired as Juddmonte’s highest earning homebred and the only European-trained mare to earn more than £10 million in prize money.

In picking up her first Group 1 in the Oaks at Epsom in 2017, Enable had become Juddmonte’s 25th homebred European Classic winner. In 2020, Siskin became the 26th, winning the Irish 2000 Guineas at the Curragh for trainer Ger Lyons, a recent addition to Prince Khalid’s roll of trainers. Bred in the US out of a British-bred mare and trained in Ireland, Siskin embodied the international nature of the modern Juddmonte operation.

In 2021, Juddmonte was sad to announce the death of His Highness Prince Khalid bin Abdullah, who died peacefully on Tuesday 12th January. Douglas Erskine Crum, CEO Juddmonte, said: “The whole of Juddmonte feels a huge sense of loss. Prince Khalid will always be remembered as a quiet, dignified, benevolent family man, whose horses spoke for him."

“He leaves a legacy that will stand the test of time. His contribution to the development of the thoroughbred will have long-lasting effects.”